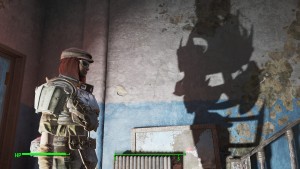 I’d be more comfortable if that shadow was less… swiss-cheesy.

I continue my play diary of Fallout 4 on the PlayStation 4. As I promised last time, today I headed over to the Cambridge Police Station to hook up with Paladin Danse. The Brotherhood and I haven’t always seen eye-to-eye on things, but they deserve a shot, right?

My adventuring earned me three levels and I dumped all mt perk points into Rifleman. With the exception of my still glorious gauss rifle, my weapons have been getting a little anemic. I’m hoping this will give them a much needed boost for the end game. 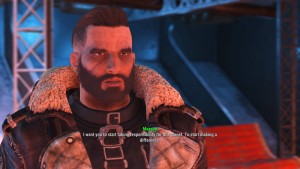 The Brotherhood of Steel has always, as they’re meant to, posed something of a moral quandary. They’re organized, powerful and generally friendly. They’re also stubborn, egotistical and more than a little racist. Every good thing about them is tainted with something awful; like a lush, chocolate cupcake topped with a small, but obvious, turd.

The Brotherhood of Fallout 3, under Elder Lyons, was the most promising. They had strong opinions and were a little gung-ho, but genuinely seemed to have the best interests of the people at heart. In Fallout: New Vegas, the local chapter was isolationist and dismissive of the local population, but still mostly noble in their goals. Both groups spoke of their “solemn duty” and “responsibility”. 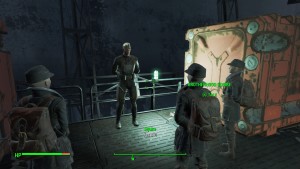 In Fallout 4, the Brotherhood, under Lyons replacement, Maxson, has a decidedly darker, and altogether less savory tone. They’re played as a caricature of military stereotypes: gung-ho, violence prone and close-minded. They consider “ghoul hunts” a fun distraction, hate mutants and consider themselves above the rest of humanity.

While they talk about “winning hearts and minds”, Proctor Teagan strongly implies that violently taking farmers crops is perfectly fine with him. More subtly, their barracks are liberally littered with alcohol.

There’s little talk of the burden of needing to eliminate mutants or synths. Instead they actively seem to enjoy it. There’s no sympathy, at all, for the synths; no consideration that they may be victims as well. In short they’re much easier to dislike than ever before. I’m going to give them every chance, but so far they just keep digging themselves in deeper. 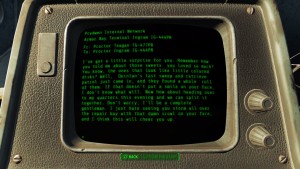 He’s got to be talking about Necco Wafers, right? Awesome.

Danse escorted me to the roof where a waiting vertibird took us to the Prydwen, the Brotherhood’s floating command center. He introduced me around and I was promoted to the rank of Knight. Because I’m awesome.

The Prydwen is huge; exploring it took time, but I finally got the lay of the land (and the catwalks). I heard a nice speech, read everybody’s email, chatted up all of the proctors and collected a few new tasks. I then had to do it all over again because when Maxson asked me to board a gunship for my first mission, it never appeared. 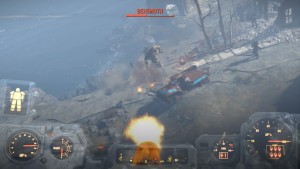 I love the smell of napalm in the morning.

I tried fast traveling, dying, changing companions and nothing worked. I finally restored from an earlier save, re-explored the entire Prydwen and, thankfully, the gunship finally showed up.

Danse and I headed out to Fort Strong to reclaim a cache of nuclear firecrackers from a horde of super-mutants. We lost our surprisingly fragile vertibird, but completed our mission. Our success impressed Maxson so much that he gave me yet another special grenade that I’ll never use; this one able to call down an equally fragile Brotherhood Vertibird on my enemies. 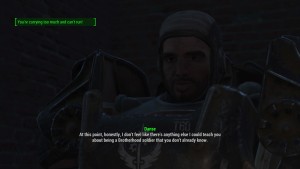 Maybe you could teach me how not to be a hoarder?

With this victory under our belts, I decided to get to know Danse a little better before moving on. We headed out to find some trouble. In quick succession we cleared Fallon’s Department Store, West Roxbury Station and Shaw High School of various super-mutants, raiders and ghouls. The station was the first truly confusing area I’d encountered. I was sure that the puzzle meant me to go in the other direction that I needed to and I spent a lot of time trying to get there.

At some point Danse decided I was pretty cool and opened up about his past. He’s really not such a bad guy behind all the brainwashing and racism. We continued South to Hyde Park where we became embroiled in a bizarre free-for-all between raiders, scavvers, gunners and the Brotherhood. It wasn’t pretty.

The school was the subject of a cost-cutting experiment: all food was replaced with a disgusting (but apparently durable) pink  goo. After the apocalypse, this resulted in a population of distinctively pink ghouls. Despite the fact that they were no longer needed, there was also a surprisingly large number of lunch boxes to be found here. 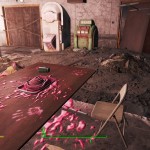 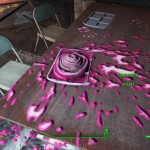 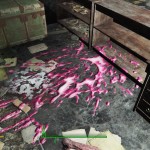 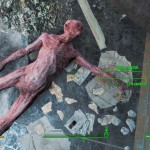 (Side effects include irritability, pinkness and nuclear armageddon.) 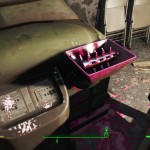 Get your very own food paste machine today! 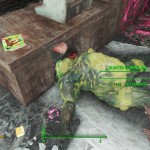 This guy caused me some trouble.

The whole sequence reminded me, in a very satisfying way, of the high-school in “The Last of Us” [My Review], one of my favorite sequences in one of my favorite games. Both sequences take place in Boston suburb, both leverage schools to create discomfort and both end with bloated zombies.

I had a handle on Danse at this point: he was a solid doofus that loved killing green things. I’d also seen him survive inside of a lit rocket engine, so I knew a little radiation wouldn’t bother him. I suited up in my tricked-out X-01 Power Armor and we headed out to the Glowing Sea to find Virgil. 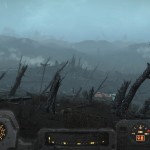 The foreboding edge of the Glowing Sea. 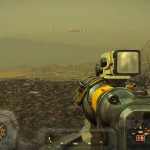 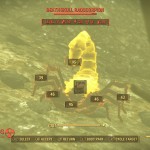 Deathskull Radscorpions have no sense of humor.

I got my ass kicked immediately – and several pieces of armor destroyed – by the first creature I met: a deathskull radscorpion. This was followed by massive, concerted stingwing assaults and multiple high-level deathclaws. I visited the Glowing Sea and all I got was mauled. 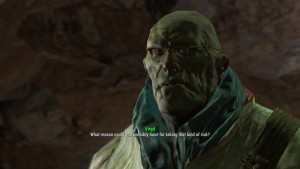 Virgil is more, um, “verdant” than we had been led to believe.

The marked location was a weird settlement at the center of the massive impact crater. I’m assumed that the people here were immune to radiation, since we spent more than thirty seconds with them and they didn’t die. They directed me to Virgil. He’d set up house in a cave to the Southwest, well off the map into Connecticut. Several more deathclaws later, we found the cave and Virgil.

It took some convincing, but he finally opened up and told us what he could. When the Institute had real problems they sent a nasty killbot called a “Courser”. Coursers have a special chip in their heads; one that we’d need to rip out to hack the teleportation system. He also told us how to find one.

From the name, I’m assuming that coursers are some kind of nasty animal robot. In other words: a boss battle! It would be a nice chance of pace, if nothing else. Off to the Institute! Maybe.