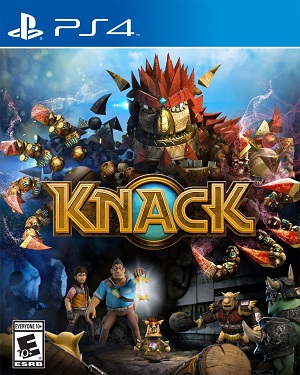 Considering the limited launch line up for the PS4, this was actually the only game that I was interested in. It seemed like a nice, traditional third-person adventure with a variable sense of scale that could show off the power of the new system. For the most part, it’s exactly that. Sadly, it’s really only that.

Graphically, as you would expect, the game is stunning. Its richly-detailed, semi-cartoonish world is colorful, rich and crisp. Lighting and surfaces are lavished attention and the frame-rate is rock-solid even with hundreds of objects and effects on screen. It’s undeniably a gorgeous game and more than worthy as a technical demo for a new console.

One Character You Will Grow to Hate

The single most hate-inducing character in the game, hands-down and without a doubt, will have to be the incredible bastard that is Cut-scene Knack. Cut-scene Knack is so infuriating on so many levels that it’s difficult to describe him fully.

You know that short chain-link fence that has defined the inviolate boundary of In-game Knack’s world for the past level? Cut-scene Knack is able to leap over that fence with one hand and laugh about it. That leap of death that has claimed In-game Knack’s innocence over an over? Cut-scene Knack can jump twice as far and still show-off with a somersault in the middle.

Cut-scene Knack is also a petty bastard. That huge collection of relics that you’ve painstakingly collected from hidden caches in horrifyingly dangerous places? The ones that make you nigh invulnerable and able to nut-punch tanks? Give Cut-scene Knack five seconds and he’ll think absolutely nothing of dumping them all on the floor as if they were trash and walking away. Hey In-game Knack, looks like you start this level as a fragile dwarf too!

Cut-scene Knack; what a tool.

Likewise, the audio work and acting is above reproach. The script may be a little trite at times, but the actors give it their best and pull off even the sillier stuff. The story is serviceable, if fractured. Humans live in a rich, sumptuous society built on the ruins of a mysterious ancient race. Goblins, on the other hand, live in primitive conditions in the worst of the wilds because… humans make them? Knack’s reasoning seems to end at “Goblins are bad because goblins are bad” and it’s just fine with that.

Knack himself is the creation of a genius, absent-minded professor type who discovered a way to imbue relics of the ancient race with consciousness. Knack is a little guy but, by collecting more of those relics, can grow to enormous proportions. Luckily, those invaluable relics that power all aspects of this civilization are literally just lying around everywhere.

Most of the game consists of a semi-targeted genocide against the entire goblin race despite the fact that, honestly, they seem to have some pretty legitimate grievances. In combat, goblins range wildly from primitives with spears and rocks, to advanced war mongers with tanks and fighter jets. The only constant is that they all absolutely, unequivocally need to be smooshed to death. Later in the game relic-constructs similar to Knack begin to appear and take on the bulk of bad-guy duty.

Combat is mostly melee with a few targeted range attacks available as special power-ups. It’s solid, if simple. Sadly, while Knack’s shifting size is a core mechanic, there’s very little difference in actual game play due to it. When small, he fights bugs and small goblins. When medium he fights goblins and robots that use nearly the same tactics and when huge he fights tanks and planes that use the same tactics. With very few exceptions Knack’s combat capabilities are exactly the same no matter how large he is.

The entire collection of platformer tropes are present. Wind blowing on narrow ledges, slippery ice, slow-sinking mud and fiery lava. Similarly, there’s a large collection of environmental traps present through the game, but nearly all of them are of the “run forward to trigger them, run back until they stop flashing” variety and pose no serious threat.

As the game progresses, Knack is able to leverage new materials to bulk up with, but these are all severely limited to very specific areas. Strategic choices are almost non-existent and with the rare exception of certain larger areas where you can choose one of three paths (but must complete all three eventually), all areas and progression are completely linear.

Even considering all of these criticisms, Knack may have still been a fine, even great, game. There are many amazing games that suffer from lack of choice, directed action and weak stories. Where Knack truly, and sadly, stumbles is in straight, well-understood game mechanics. No experienced team should have committed these sins.

Knack’s difficulty curve is a twisted, looping roller coaster. The game is never too difficult – in fact it’s rather easy generally – but there are many seemingly random points where the challenge spikes wildly for no apparent reason. This is made more frustrating because Knack is both relatively fragile and health is relatively rare.

You will die often in Knack. If the difficulty spikes don’t get you, the wild, rolling camera will. You’ll then be introduced to Knack’s utterly broken checkpoint systems. Firstly, Knack doesn’t restore collected power when respawning. If you nearly complete a challenging section by leveraging the various super attacks, then die, you’ll be forced to attempt it again with none of them available.

More damning, what you’ll be forced to replay after death is anybody’s guess. The checkpoint system is a roulette wheel of pain. You may be sent back just a short way, or you may have to complete nearly the entire level. Cheap deaths and tedious replay squander any goodwill that the game might generate.

Each boss is clearly divided into several distinct phases, but the checkpoint system most often forces you to start at the beginning in the case of failure. Since boss battles tend squarely towards the tedious; rote repetition being the rule, this can be incredibly frustrating. Like much of the game, boss battles are also padded obviously and liberally for time.

All of these problems drag Knack squarely into mediocre territory and this is a terrible shame. The basic ideas behind Knack are promising and the visual design successful. The game is hamstrung by simplistic execution and an amateurish implementation. I do hope that the character gets another chance. With a more experienced team and deeper game play this could easily become the next generation mascot that Sony was hoping for.