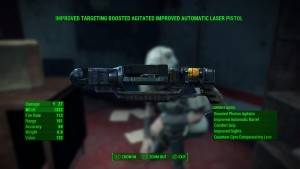 Some people complain about the weapon names, but what else would you call an Improved Targeting Boosted Agitated Improved Automatic Laser Pistol? An ITBAIALP?!

I continue my play diary of Fallout 4 on PlayStation 4. Family has come and gone for the holidays and I finally have uninterrupted access to my TV (at least until Monday, when I have to go back to work).

I mostly continued with the Railroad missions and gained several levels. I’m fairly happy with my character as-is, so I’m focusing now on some of the annoyances. Firstly, I upped my Strength by one point, to six, allowing me to spend an additional two points on Strong Back. I’ve enjoyed the extra 50 pounds of carry weight immensely.

I also took the third and final rank of Better Criticals and the second rank of Demolition Expert. As enemies have increased in strength I’ve found the need to introduce multiple Assaultrons, Sentry Bots and Deathclaws to big piles of mines. With the second rank I can craft cryo and frag mines and grenades. I also get a 50% damage bonus with explosives and a throwing arc with grenades al a Uncharted. 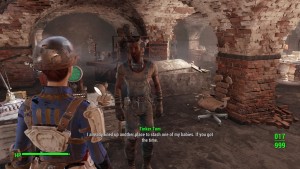 Tinker Tom is a useful merchant when he isn’t babbling on about nonsense.

Running The Railroad missions has been very profitable in the way of gear. After doing the second DIA Cache mission for P.A.M. I can now use “ballistic weave” with my rank four Armorer perk to convert a lot of clothing into very effective armor. Neat… but annoying.

You see, this can only be applied to some clothing (I think only “fabric”) and, criminally, can not be applied to your vault suit. Nearly all of the applicable clothing can’t be worn with other armor. In fact, the only clothing I’ve found that can be modified and allows full use of other armor is the completely butt-ugly military fatigues. 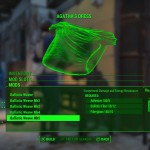 Agatha’s Dress can become decent armor on it’s own, but you’ll lose any perks you had on individual armor pieces. 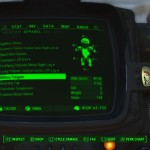 Most clothing prevents the use of other armor. A very few allow for arms or legs, but, so far, only the military fatigues have no limitations. 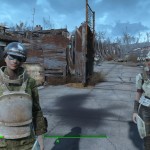 Piper hates it. I can tell. I look like a moldy muffin!

It is hard to argue with an extra 110 points of ballistic resistance and 115 points of energy resistance. My new weapons loadout is less bittersweet: 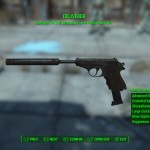 Deliverer has replaced my beloved Plasma-infused 10mm as my suppressed weapon option. 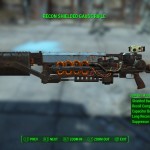 Although lacking a special enhancement, this fully modded Gauss rifle is still a beast. 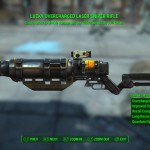 I had previously been carrying a much wider – and heavier – assortment of weapons. I’ve stripped down to three: a suppressed pistol for the sneaking, my trusty laser rifle as a general workhorse and my new beastly – but light on ammo – gauss rifle in case of emergencies. Of course, I supplement this with a healthy collection of mines and grenades and I still carry Kremvh’s Tooth for when a personal, “stabby” touch is required.

With these changes, my standard load out weight has been reduced to the mid-130’s leaving me over 200lbs free carry weight. 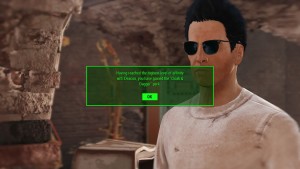 I continued doing odd jobs for The Railroad. It seemed appropriate, during this time, to keep Deacon as my companion and it turned out to be extremely easy to make him idolize me. I now get 20% higher damage on sneak attacks and dramatically increased duration for Stealth Boys.  Disappointingly, he was yet another companion that didn’t feature personal quests. Like Strong, his conversation seemed to be leading in that direction, but nothing ever came of it. 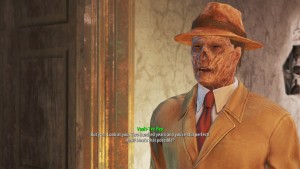 I also forgot to mention something last time: I found the Vault-Tec Sales Rep! He was holed up in the Hotel Rexford, in Good Neighbor! I was there to murder a gangster who was extorting money from me, but hey, I had time to catch up with somebody from the old (really old) neighborhood! He seemed to be having a rough go of it, so I convinced him to head back to Sanctuary Hills. He seemed happy about the idea, but it’s been many game days and he hasn’t actually shown up yet. Maybe he met a nice lady ghoul on the way or something? 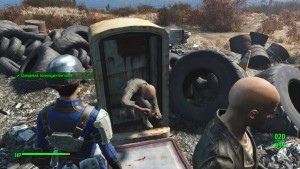 The Silver Shroud would have done it with style!

The Railroad missions have slid into the bog of radiant quests, but are still generally more interesting than the settlement quests. I continue placing sensor stations for Tinker Tom and have also started sussing out old military caches for P.A.M.

On the way to one of them, I heard a voice. A voice asking for help! It took me longer than I’d to admit to find the source: a locked refrigerator (really, why did refrigerators ever lock?) containing a ghoul kid that hadn’t seen the light of day for 200 years. He begged for help. Obviously, he was named “Billy”. Deacon and I escorted Billy home where, to our suprise, we found his ghouly parents; apparently ghouliosity is hereditary!  We topped off the trip by slaughtering some filthy slavers that wanted the family. 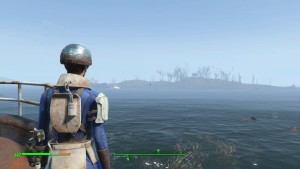 On the next leg of your escape, you’ll do an extended swim through radioactive water. Because I said so, that’s why!

After seeing the workbench at Bunker Hill, I knew that I would have an opportunity to add even more settlements to my already crowded stable, but I didn’t expect it to happen so soon. I was sent to scope out Mercer Safehouse, situated on Spectacle Island, to clear it for use. The problem is, I couldn’t find any way to get there. I scoured the shore looking for boats or bridges or… anything, but gave up and ended up swimming out there.

I quickly realized that the island was infested with mirelurks. Nasty ones. An audio deterrent system had broken down and needed to be re-enabled. This seems like something that could have landed on the “need to know” side of the board. 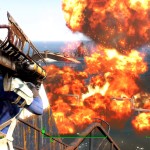 Mirelurk queens aren’t the challenge they once were. Especially when somebody leaves a Fatman lying around. 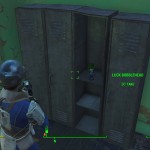 THIS is where the Luck bobblehead has been hiding! 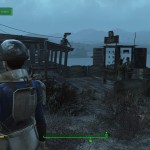 The building space on the island is huge, but I crammed everybody into a one-room shack. I did give them a bar, tho’.

I tangled briefly, but explosively with a mirelurk queen, found the Luck bobblehead and turned the deterrent system back on. This sent the remaining ‘Murks scuttling away to the fringes. I then spent a couple hours outfitting Spectacle Island as a new, albeit remote, settlement. It’s the largest settlement, in terms of building space, that I’ve seen so far, but other than that there’s really nothing to recommend it. Maybe, if the DLC let’s us construct a ferryboat, I could get some tourist traffic going…